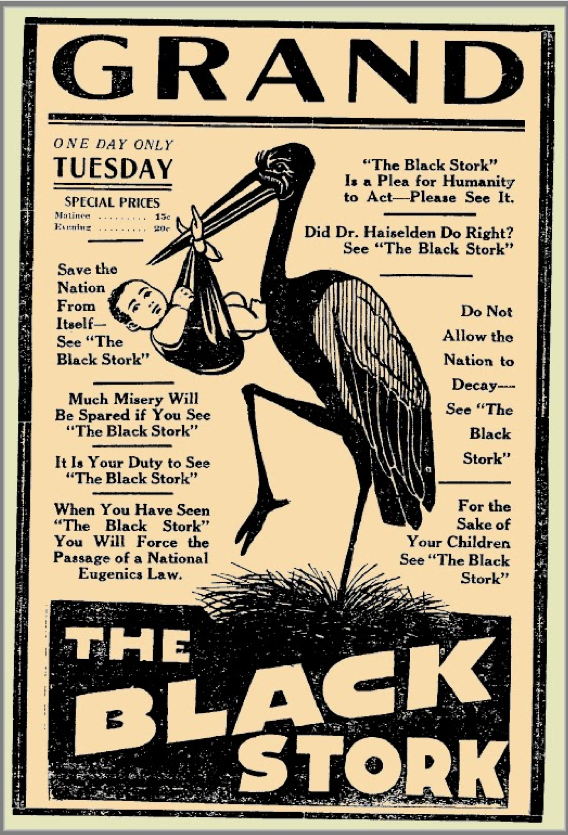 The Director of the Eugenics Records Office, biologist Charles Davenport, called for Americans to learn a new doctrine of self-sacrifice rooted in a ‘eugenic religion.’ That religion would depend upon the duties of parenthood for the “healthy” and abstention from marriage among the “unfit.” The American Eugenics Society ensured the spread of eugenic anxieties, assumptions, and solutions throughout the country.

Chicago physician Harry Haiselden created a film called The Black Stork based on his own decision, on eugenic grounds, not to operate on a baby with an unperforated anus (as a consequence the baby died). In the film version of the story, the baby’s father had an inherited disease and had been warned not to marry. The mother has a dream in which her ‘disabled’ child lives a life of suffering, and she awakes having seen the ‘light of eugenic reason.’ The film was shown from 1917 into the early 1940s. 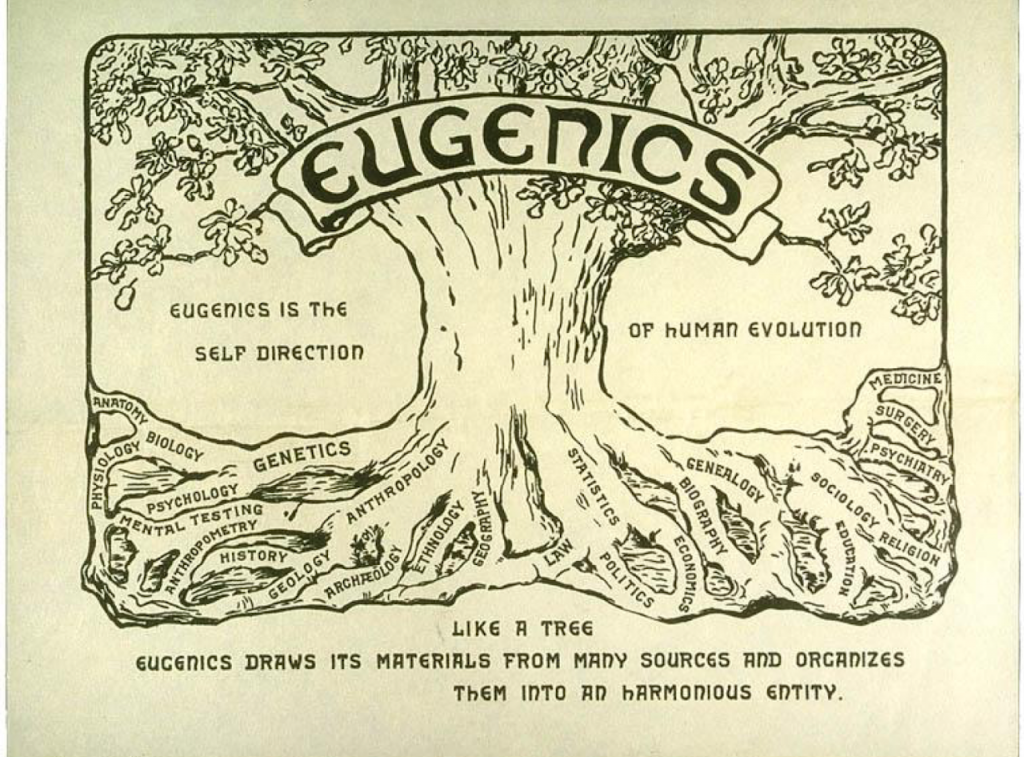 This image was created for pamphlets and posters associated with the International Congress of Eugenics held at the American Museum of Natural History in New York in 1921. The Congress was presided over by paleontologist Henry Fairfield Osborn, director of the museum. Osborn believed the museum was ‘a positive engine for the propagation of socially desirable views’ that could build a ‘true civilization on a knowledge of and obedience to the Laws of Nature.’ One of those ‘laws’ was that Heredity, rather than the Environment, made men what they are. 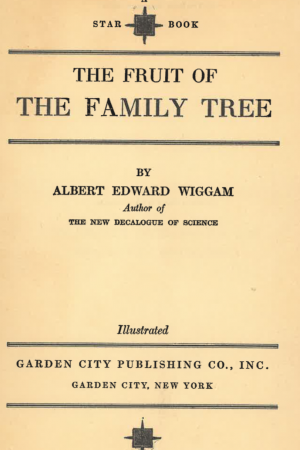 Albert Wiggam spread the ‘gospel’ of eugenics far and wide. His work was praised by professional biologists. Princeton biologist E.G. Conklin wrote the following of Wiggam’s 1922 book The New Decalogue: “It is a splendid statement of one of the greatest needs of modern civilization – a need so great and so urgent that unless the warning which he has uttered are heeded by our statesmen, educators, and people in general it will mean the decline of civilization and its ultimate downfall.” ~ Century Magazine 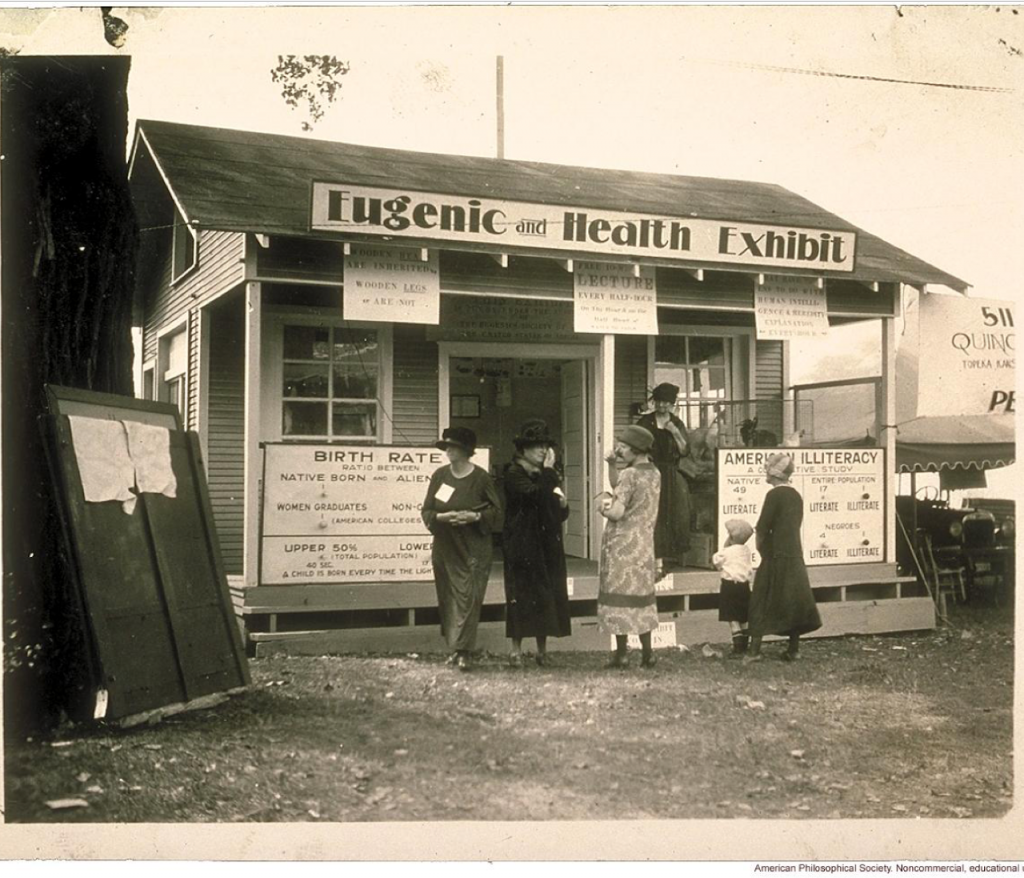 Eugenics Societies organized hundreds of exhibits aimed at educating the public, often at State Fairs. The exhibits sponsored “Fitter Family” and “Better Baby” Contests. Eugenics melded with public health campaigns, resulting in a confusing mix of recommendations on how to improve one’s environment while attending to mate choice. By the 1920s, many biologists and psychologists argued that heredity and proper mate choice was the only means of ensuring permanent progress (as compared to improving the environment of, for example, the poor). 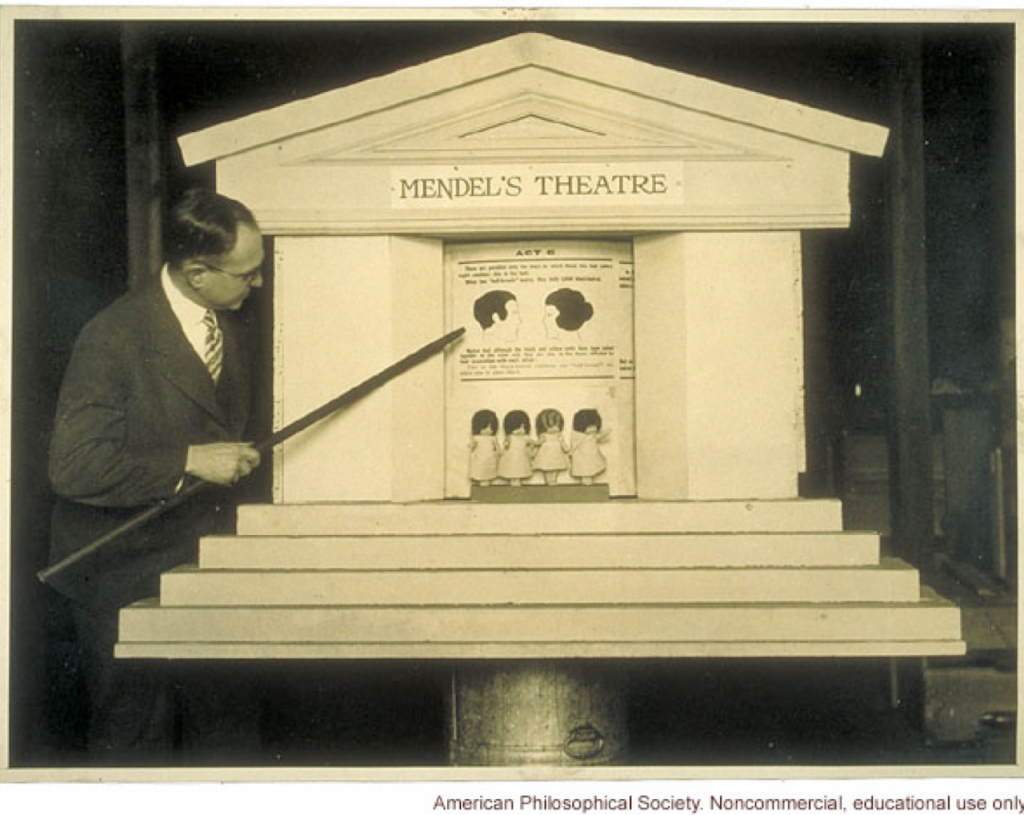 Here hair color is used to demonstrate Mendelian inheritance. Geneticists like Thomas Hunt Morgan had long-since developed more a complicated understanding of how heredity works, but Morgan, at least, refused to publicly critique eugenics on the grounds scientists shouldn’t be involved in either religion or politics. 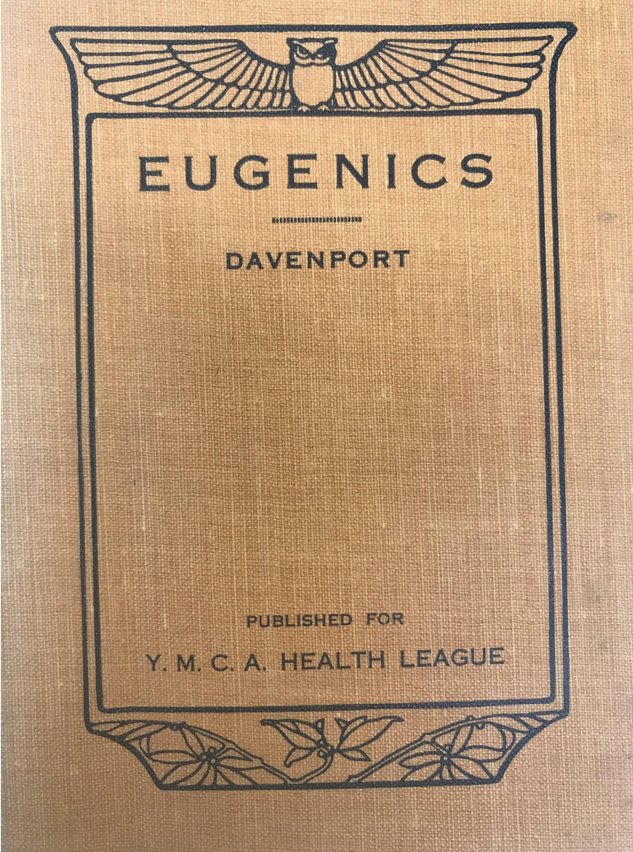 Professional biologists were split on the matter of whether they should be involved in the eugenics movement. Biologist Charles Davenport, director of the Eugenics Records Office at Cold Spring Harbor Laboratory in New York, wrote about eugenics for a range of audiences. A copy of a pamphlet Davenport wrote for the YMCA Health League is in Slater’s Papers in the Archives & Special Collections of Collins Memorial Library. Davenport’s first chapter was entitled “Fit and Unfit Matings” and began: “There comes in a time in the life of most thoughtful, cultured people when they realize they are drifting toward marriage and when they stop to consider whether this proposed union will led to healthful, mentally well endowed offspring. But however much such a person may take the advice of books and friends, he will find much lack of definitive knowledge that, shutting his eyes to possible disaster, he decides to take his chances. Were our knowledge of heredity more precisely formulated, there is little doubt that many certainly unfit matings would be prevented, and other fit matings, that are avoided through false scruples, would be happily contracted.” 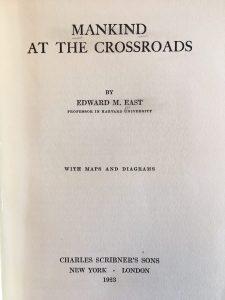 By contrast, Nobel-prize winning geneticist Thomas Hunt Morgan criticized the movement as too political. Others, like Harvard biologist Edward East, wrote books for major publishers on the subject with titles like Heredity and Human Affairs and Mankind at the Crossroads. James Slater’s student, James Legg, cited East’s Mankind at the Crossroads in a 1947 thesis defending sterilization for eugenic purposes. 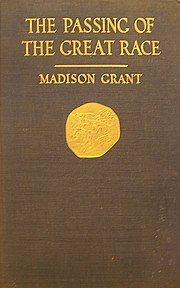 Madison Grant’s The Passing of the Great Race, or, the Racial Basis of European History (1916)

Madison Grant argued that Europeans were comprised of three separate subspecies, and that those ‘subspecies’ were in competition. Hitler called Grant’s book his bible. The director of the American Natural History Museum (in New York) Henry Fairfield Osborn wrote a laudatory preface to Grant’s book and the book was reviewed favorably in the pages of Science. Other biologists, like W.E. Castle, criticized Grant’s book as ‘racist propaganda.’ Meanwhile, Grant served as vice president of the Immigration Restriction League from 1922 to 1937 and campaigned for laws to prevent ‘race-mixing.’